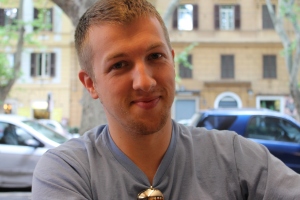 Me in a Nutshell

My name is Mike, but I author books under the pen name of Eli Kale. I write mostly in the genre of historical fiction. My first book, Resistant, was published in April 2014.

I graduated from the University of Mount Union with a history degree and a teaching license. While there, I developed a keen interest in history, especially the World War II period, which has grown into a fond passion. That era populates the content of many of the books on my reading and reference shelf.

I enjoy reading books about the Second World War, the Cold War, the KGB, the CIA, and memoirs, just to name a few. In my spare time outside of reading and writing, I like to play and watch soccer, most closely following the seasonal campaigns of Liverpool FC.  I also thoroughly enjoy watching movies.

I live with my wife (Sarah) and sons and daughter (Everett and Adler, and Marin) in Ohio. We have an adopted cat named Zazu. We both enjoy spending time together with our families, many of whom are spread out in and around Ohio.

I was always creative as a kid, using my imagination for many things, including storytelling. I didn’t really get into writing until college. I took an Introduction to Fiction course to satisfy my general English requirement, and one of the assignments was for me to create a fictional story of any length and theme of my choice.

I brainstormed some ideas, and finally decided I wanted to write something set during World War II, my favorite historical time period. I did some research and roughed out a story, polished it, and finally turned it in to my professor. He encouraged me to submit it to the university’s literary magazine…so that’s what I did. At the time, I was the under the impression that if the editors liked the story, they’d publish it and maybe give me a copy. I was mistaken.

A few weeks down the road, my professor said, “Hey, your story was accepted. You should expect a check within the next couple of weeks.” I had no idea what he was telling me, and he could tell that by the look on my face. “You placed second.” I asked him what he meant and he told me that there was a writing contest put on by the magazine, with cash prizes for those writers whose works were chosen to be published.  Mine was chosen, behind only one other writer’s story, to be placed in the magazine.

At the end of it all, I received a check for $100 and five copies of the magazine with my story right there, printed in front of me. I was very humbled by the experience, and proud of myself for the effort I put forth with that story. It was at that moment that I realized that I could really do something with writing if I put my mind to it and took it seriously.

I developed a passion for writing very quickly. Within the two years after graduation, I had written two short stories (published in my first short story volume) and my first big project, a novella entitled, “Resistant,” which is part of The Faces of the War Collection. Within a year of my first release, I published another WWII book entitled, “Unguarded,” also part of Faces. I then worked simultaneously on my second short story volume and my third WWII book. The former was released in mid-October; the latter, entitled “Imminent,” was released in January 2016. The fourth book in my Faces collection, entitled “Needless,” was released in January 2017.

I am currently working on my fifth book, though it won’t be a part of the Faces collection. This standalone project is going in a different direction in terms of time period and storytelling. I plan to release it by Fall 2023, if not sooner.

You can find me on…

You can email me at…

A big welcome to the newcomers on my site! Please feel free to browse around and see what I'm up to.
Join 1,355 other subscribers