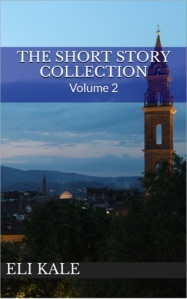 You can find this Kindle ebook on Amazon here.

Book Sample from “The Last Man”

The café near the Kaiser Wilhelm church was emptier than usual. There were only a handful of customers there. I had been sitting at the little patio table for a minute and a half before a waitress came to take my order. She was a very pleasant young woman. Her hair was golden brown and in a bun, her eyes hazel and gleaming, and she had the complexion of an angel. The striped apron tied around her waist over top of her clothes fit snugly to her slender form. She walked gracefully but with purpose as she waited on the various tables of the patio café, jotting down orders on her little pad of paper.

“Was möchten Sie? Kaffee…Tea…Strudel?” she asked me, ready to write on her little pad.

“Ich möchte einen Kaffee, und Strudel, bitte,” I replied. She nodded and smiled, then walked into the café. The morning air was refreshing as it blew gently down the main street in Berlin; it swept across my face as I pondered the past. It was hard to believe that just a year before to the day, the Berlin Wall was torn down, heralding the inevitable collapse of communism. It was even harder to believe that it had been forty-five years since I was last in Berlin. I never thought I’d step foot into the city again after what had happened all those years ago.

The waitress returned with my coffee and strudel, smiling as she handed them to me. I nodded, signaling that that was all I needed. As I bit into the flaky treat and sipped on my coffee, my thoughts began to stir, awakening memories of long ago that had since been tucked away deep in the recesses of my mind. Forty-five years before I was having brunch in that Berlin café, I was coming to the city in a far more aggressive manner and with much crueler intentions.

A big welcome to the newcomers on my site! Please feel free to browse around and see what I'm up to.